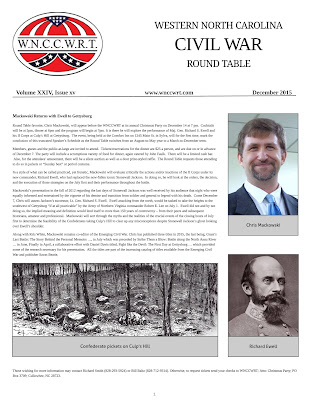 Mackowski Returns with Ewell to Gettysburg

Round Table favorite, Chris Mackowski, will appear before the WNCCWRT at its annual Christmas Party on December 14 at 7 pm. Cocktails will be at 5pm, dinner at 6pm and the program witll bein at 7pm.  It is there he will explore the performance of Maj. Gen Richard S. Ewell and his II Corps at Culp’s Hill at Gettysburg.  The event, being held at the Comfort Inn on 1245 Main St. in Sylva, will for the first time mark the conclusion of this truncated Speaker’s Schedule as the Round Table switches from an August-to-May year to a March-to-December term.


Members, guests and the public-at-large are invited to attend.  Tickets/reservations for the dinner are $25 a person, and are due on or in advance of December 7. The party will include a scrumptious variety for dinner, again catered by John Faulk.  There will be a limited cash bar.  Also, for the attendees’ amusement, there will be a silent auction as well as a door prize-styled raffle.  The Round Tables request those attending to do so in jackets or “Sunday best” or period costume.
In a style of what can be called practiced, yet frenetic, Mackowski will evaluate critically the actions and/or inactions of the II Corps under its new commander, Richard Ewell, who had replaced the now-fallen iconic Stonewall Jackson.  In doing so, he will look at the orders, the decision, and the execution of those strategies on the July first and their performance throughout the battle.


The Round Table looks forward to seeing all of its old friends on what promises to be a delightful evening of fun, scholarship and camaraderie.